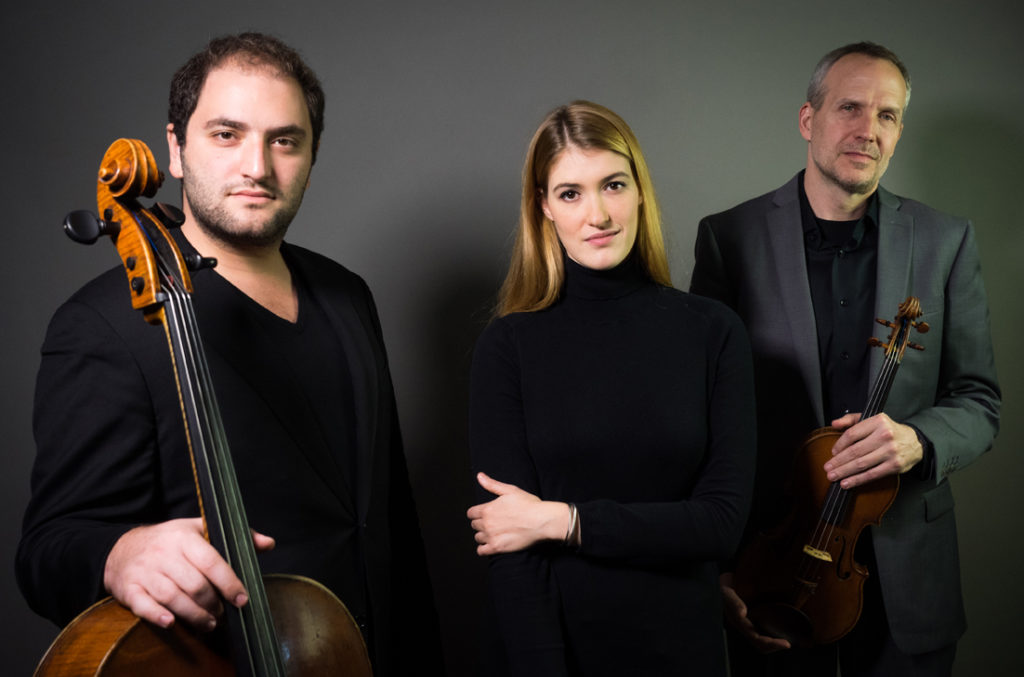 Calendar
Tickets
When:
June 30, 2019 @ 3:00 pm – 5:00 pm America/New York Timezone
2019-06-30T15:00:00-04:00
2019-06-30T17:00:00-04:00
Where:
Ruggero Piano
4720 HARGROVE ROAD
SUITE 120
Cost:
20
Contact:
Ruggero Piano
919-839-2040
Concert
The Mile-End Trio
Sunday, June 30th, at 3:00PM
Doors open at 2:30PM
Bösendorfer Hall, Ruggero Piano
Program
Piano Trio in D Major Op. 70 #1 “Ghost” L. Van Beethoven (1770-1827)
Allegro vivace e con brio
Largo assai ed espressivo
Presto
Other assorted works to be announced
Jeff Multer, Violin
Julian Schwarz, Cello
Marika Bournaki, Piano
Jeffrey Multer (violin), Julian Schwarz (cello), and Marika Bournaki (piano) have banded together in a new year-round artistic venture – The Mile-End Trio. The three are familiar faces at Eastern Music Festival each summer.
Multer, who is recognized worldwide for his passionate performances, depth of musical understanding and technique, is head of EMF’s violin faculty and is beginning his 21st season as EMF’s concert master. Jeff serves as concertmaster of the Florida Orchestra and performs frequently with orchestras and chamber ensembles around the globe.
Schwarz, who was born to a multigenerational musical family and is the son of EMF’s Music Director Gerard Schwarz, won first prize at the 2016 Boulder International Chamber Music Competition’s “The art of Duo” with Canadian pianist Marika Bournaki. 2018 will mark his sixth season with EMF. Julian is newly-appointed to the faculty of the Shenandoah Conservatory of Music and he maintains a very busy concert and teaching calendar.
Bournaki, well known as a world-class performer and a brilliant pianist, has appeared as guest soloist with symphonies across the globe. The award-winning documentary I am not a rock star features Bournaki’s evolution as an artist from the age of 12 to 20. Bournaki is looking forward to her third season with EMF in 2018.
The Mile-End Trio’s name is simple – this trio was rehearsing in Bournaki’s native Montreal Canada in the colorful and charming Mile-End neighborhood. Thus, their moniker. Hailed as “richly satisfying” by Classical Voices of North Carolina, The Mile-End Trio made their EMF debut in July 2017.

Richard Ruggero is maintaining my 2004 Mason-Hamlin BB grand piano. He does a great job and last year he replaced the hammers on the piano for me. Ruggero has a wonderful selection of top-quality pianos in the store and it is a pleasure to go there. - Gordon Stevens

Any cookies that may not be particularly necessary for the website to function and is used specifically to collect user personal data via analytics, ads, other embedded contents are termed as non-necessary cookies. It is mandatory to procure user consent prior to running these cookies on your website.